What is Central Sleep Apnea? Symptoms, Causes, Treatment, and More 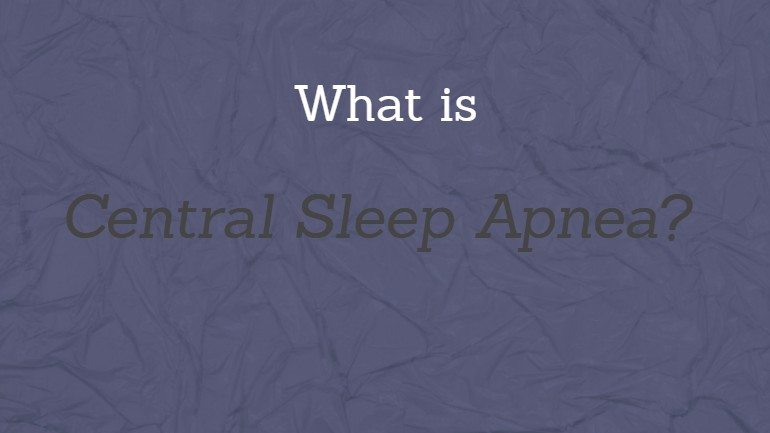 Sleep apnea is a common sleep disorder that affects around 20 million Americans each year, along with hundreds of millions worldwide. There are a couple different types of sleep apnea, including obstructive, central, and mixed. Today we will take a closer look at central sleep apnea, including symptoms, causes, treatment options and more.

What is Central Sleep Apnea?

Central sleep apnea is a sleep disorder that causes lapses in breathing during sleep. Central sleep apnea is caused by the brain temporarily failing to send the proper signal to the muscles that control breathing. This can cause a temporary cessation in breath, which often leads to the patient exiting REM sleep, or even waking up completely.

What are the Symptoms of Central Sleep Apnea?

Central sleep apnea symptoms are more or less the same as the symptoms of obstructive sleep apnea. The most notable symptoms include:

One notable difference between central and obstructive sleep apnea is that snoring is much more prevalent among suffers of OSA than patients with CSA. Central sleep apnea patients may still snore, but it’s less likely to be related to their sleep apnea.

What Options are there for Central Sleep Apnea Treatment?

Central apnea can be treated in a few different ways. The most common treatments include:

The first-line treatment for CSA patients is typically the use of a CPAP or BiPAP machine (explore the differences here). If that form of therapy fails, the patient may be prescribed an adaptive-servo ventilation device, which monitors breathing and adjusts airflow to prevent sleep apnea episodes. In some cases, medications such as acetazolamide (Diamox) or theophylline (Theo-24, Theochron) may be effective in reducing symptoms, as well.

How Can I Learn More?

If you believe you or a loved one may be suffering from central apnea, the next step is to speak with your doctor. From there, you will likely take a home sleep study to determine if you have any sort of sleep disorder, including CSA. If you are indeed diagnosed with sleep apnea, your doctor will discuss treatment options with you. If you are simply interested in more information, this MayoClinic guide is very informative.

Austin Meadows
Austin Meadows is a freelance writer, CPAP user, and self-proclaimed sleep enthusiast from the Seattle area. When he's not writing or researching about sleep science, you can find him snowboarding, cooking or traveling the world. Contact him at austin@sleepzoo.com.