Facebook Wants to Know Who or What You Sleep With 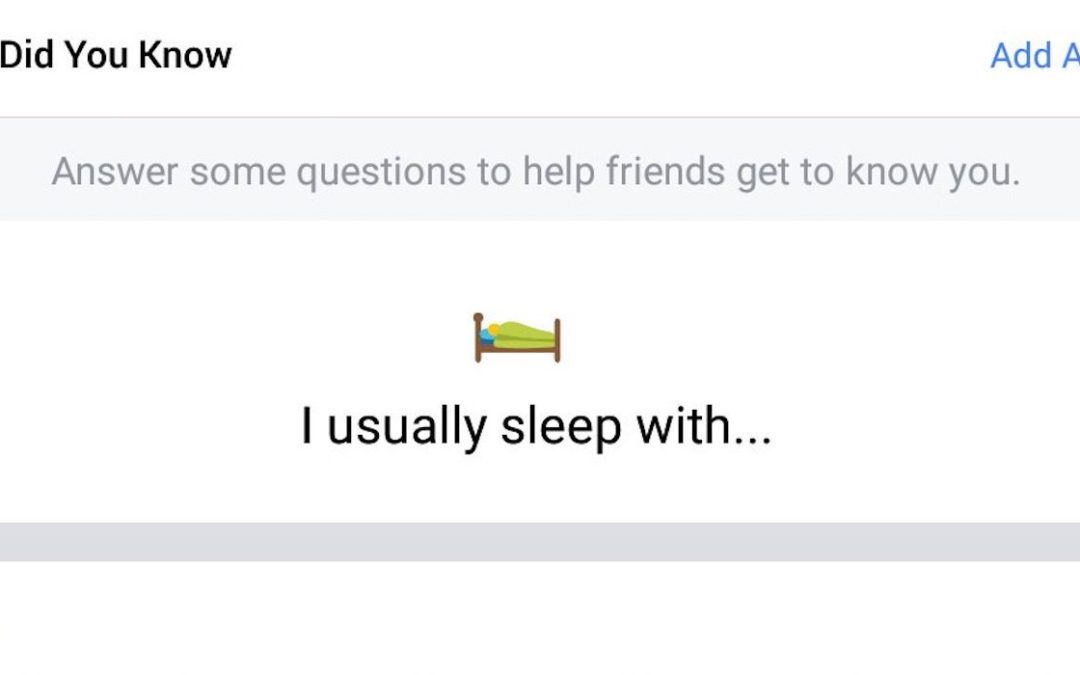 If you haven’t figured it out on your own by now, Facebook is pretty creepy. The social media giant might have started out as a way to stalk that cute girl in your chemistry lab and keep up with your high school buddies, but has by now become Big Brother. Facebook controls a terrifying amount of personal data provided willingly by users, but that’s just the obvious part. Facebook and its Messenger app collect all sorts of data when users aren’t even aware of it and sell it to advertisers, turn it over to intelligence agencies, and who knows what else. Now, in a yet another turn for the creepy, Facebook has started prying into users’ sleeping habits, asking them questions about who or what they sleep with. Has Facebook gone too far?

The questions came as part of Facebook’s new “Did You Know?” questionnaires appearing on users’ news feeds. The questions are intended to serve as icebreakers for users to share interesting or little known facts about themselves with their fb friends. One of the questions which appeared recently asks users to complete the statement “I usually sleep with…” Obviously, people’s minds went straight to the gutter, prompting many users to accuse the company of prying too far into people’s personal lives.

For its part, Facebook assures everyone that they were asking users to share what they usually sleep with (such as a teddy bear or snoring robot) rather than who they usually sleep with. Still, the backlash was enough to force the social media site to take the question off of the “Did You Know” questionnaire. When asked for a comment on the incident, a spokesperson for Facebook told The Independent that “we imagined someone might tell their friends about sleeping with their favorite stuffed giraffe, but we’ve removed the question after our community provided feedback that it was too personal.”

Here’s the thing though – what would they have done with the data they collected if people hadn’t gotten upset? Was Facebook seeking to map out the webs of romantic relationships among its users’ many social circles? Who knows. One thing is certain – now is a better time than ever to delete your Facebook account and forget social media was ever a thing to begin with. You’ll thank yourself later after your sleep improves.